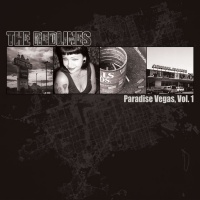 It was a trip down the rabbit hole of the Tom Petty discography that connected the dots for The Redlines with their latest release, the five-song EP, Paradise Vegas, Vol. 1. After watching the Runnin’ Down a Dream biopic, lead singer and guitarist Brian Seese dove into a six-week binge of the back catalog of Tom Petty & the Heartbreakers, which sparked memories of his time living in Las Vegas in the mid 90’s. Inspired and influenced by Petty’s songwriting, Seese began to explore his desire to move to Vegas, his experiences as a resident of Sin City and ultimately his decision to move back home to start a band.

“I would listen to each Tom Petty album exclusively for a week at a time and then move on to the next. There’s a simplicity to his songwriting but it allows for a fullness of the music,” said Seese, “There was a natural spark of inspiration and after a couple weeks I found myself writing these songs focusing on my time in Vegas.”

Within months of Seese’s return to Pittsburgh in 1997 and as part of his new band he had met bassist Tony Vinski. It was through this long-time friendship that the roots of The Redlines were sown. Looking to start a new band in 2010, Seese enlisted Vinski to help flesh out some songs in hopes of recording a demo and recruiting new members. What started as a temporary project quickly turned permanent as the group, a trio at that time, realized they were on to something.

“Brian and I had been starting various bands together for almost 10 years at that point with nothing really sticking. I wasn’t exactly looking to start something new at the time; I was just trying to help out a friend who did,” said Vinski, “But after working on the songs I knew I wanted to be a part of this.”

Now, almost a decade later, the band has matured its sound and refined its songwriting process. By design each song on Paradise Vegas, Vol. 1 brings a more personal touch to the lyrics as well as an openness to the music. That openness allows guitarist Jason Lizzi to layer melodic leads over a full yet steady rhythm section anchored by drummer Mark Ciorra. The extra breathing room left space for guest musicians Demos Papadimas on harmonica as well as Chris Leonardi on keyboard and organ. The EP, released in May 2019, features two songs co-produced by Frank Secich (Blue Ash, The Stiv Bators Band, Club Wow, The Deadbeat Poets).

Through the years the band has released a self-titled full-length album and three EPs with this latest release, including the single “Drive to L.A.”, available on CD, 10-inch vinyl, and digital download & streaming. Songs from these albums, all recorded in Youngstown, OH at Ampreon Studios by Pete Drivere (of The Deadbeat Poets) and released on Pittsburgh-based Swade Records, have garnered airplay on Pittsburgh’s WXDX (105.9 The X), Butler’s WLER (97.7), Youngstown, Ohio’s WNCD (93.3 The Wolf), Goldie’s Garage show on Sirius XM’s Little Stevens Underground Garage channel, and is in the regular rotation on Tri Lakes Radio out of Colorado Springs, CO, Rage Rock Radio Pittsburgh and Code Zero Radio in Minnesota.