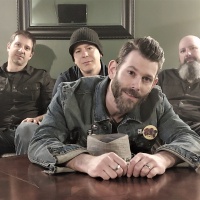 When one looks at all the pieces that shape The Redlines it comes down to one thing: Rock & Roll.  Hailing from just north of Pittsburgh, PA, the 4-piece band has taken personal influences and past experience to create a sound they call, American Rock & Roll, a unique blend of twangy roots rock and crunching power-pop.  “We could spend all day trying to come up with different ways to describe our music but when it comes down to it we’re a rock & roll band,“ says singer/guitarist Brian Seese, “To us it’s a badge of honor”.

There’s no place where that’s more apparent than on the stage where The Redlines break out all the stops to put on an entertaining rock show.  Not content to simply play songs directly from their albums, varied as the are, the band mixes up originals by enlisting the help of other musicians on the bill whenever the opportunity presents itself. Percussionists, violinists, singers and keyboard players have all shared the stage. Cover songs are not exempt from The Redlines treatment where blues classics like “Goodnight Irene” are sped up and the rock staples like “Bad Moon Rising” are given a unique spin in a minor key.

What started as a temporary project for Brian in 2010, The Redlines quickly turned permanent as bass player Tony Vinski was recruited and Jason Lizzi was brought on to play guitar.  Finding a long-term drummer has proven more difficult, but the Spinal Tap-esque turnover was halted with the addition of Mark Ciorra in 2017.

Among all the lineup changes the band has released a self-titled full-length album and two EPs, the latest being 2016’s “This Road Can Go On” featuring the single “County Road”.  Songs from these albums, all recorded in Youngstown at Ampreon Studios by Pete Drivere (of The Deadbeat Poets) and released on Pittsburgh-based Swade Records, have garnered airplay on Pittsburgh’s WXDX (105.9 The X), Butler’s WLER (97.7), Youngstown, Ohio’s WNCD (93.3 The Wolf), and is in the regular rotation of Tri Lakes Radio out of Colorado Springs, CO.  The band has also performed live on WDVE (102.5) as part of the DVE Coffeehouse.

On stage the band has played at Mr. Smalls Theater, Club Cafe, Howler’s Coyote Cafe, the 31st St. Pub, Wooley Bullys, and Peter B’s as well as venturing out to Ohio to play Cedars (Youngstown) and The Buzzbin (Canton). The summer festival season has seen the band invited to R.A.N.T, The Pittsburgh Marathon, and The Deutschtown Music Festival, and for the last 3 years, The Band Jam Grass Roots Music Festival.

With a solidified lineup, the band is looking forward to continue getting out and sharing their brand of American Rock & Roll with audiences across the region.  “Our time is now”, says Tony, “We might not have been through as much as some bands but we’ve had our struggles in the past.  Now the right pieces are in place.  We’re excited to bring it all to the stage and show everyone what American Rock & Roll is all about.”