Bones Under the Morning Sun 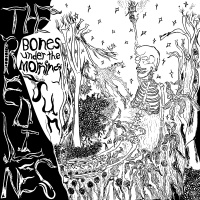 Well into their 9th year as a band, The Redlines sound continues to evolve and nowhere is that more evident than on their latest full-length album, Bones Under the Morning Sun, a combination of five older and five new songs released on Swade Records.

“You can hear our growth”, says vocalist and guitarist Brian Seese, “You can hear us coming together as a band in real-time from song to song.”

The “bones” of the new album starts with the 2016 EP, This Road Can Go On, that was primarily released digitally but gained little traction due to limited physical distribution to promote. Rather than simply re-release that EP on physical media like vinyl and CD, the band opted to add to it as a way to acknowledge the past while giving a hint at the future.  With full-time drummer, Mark Ciorra, solidifying the lineup, three previously unrecorded songs were finally tracked while two fresh songs, highlighting the cohesive and collective songwriting of the band, were also included.

The album kicks off with the slide guitar-driven Appalachian foot-stomper, “Panic Attack” followed by the swaggering Stones-esque “Snake”, both written by guitarist, Jason Lizzi.  The album also features a haunting cover of the Creedence Clearwater Revival classic, “Bad Moon Rising” and the heavier, introspective desert-rock riffage of “Down to the River”.

“This album is a real turning point for us”, says bassist Tony Vinski, “It puts a bow on some of our older songs; ones that we still love to play live but they just weren’t ready for recording at the time when we were working in previous sessions. Plus it shines a light on our newer material that is expanding our rock & roll landscape”.

Available digitally for download and streaming as well as physically on CD and 12” vinyl, the final result displays the diverse talents and influences of the band.